Last year I wrote a column titled “My Toyota Dilemma,” what I considered a nice little story about how I, an avid fan of the Toyota quality principles, didn’t actually own a Toyota, and how ironic that was. However, Quality Digest fans, I can now declare that I am—well, really my wife is—a proud owner of a Toyota automobile.

In the fall of 2011, I relocated, through my employer, from the United Kingdom to Louisiana. Moving to the United States meant we had to sell our European cars, but this wasn’t due to the fact that the steering wheel is on the right side of the car (and when I say “right,” I mean that it’s on the correct side). We sold them because moving our cars wasn’t part of the relocation package.

Once we arrived in Louisiana, my wife and I applied for Social Security numbers, and then we experienced being processed at the DMV. Having passed our driving tests, we were granted driver’s licenses. Public transport isn’t a ready solution for us where we now live, so I thought we could pick up a couple of cheap cars to get us from A to B.

As I’ve observed before, America in general is obsessed with cars. I have colleagues who have at least two cars for themselves: their commuter cars and their weekend cars. The weekend car in Louisiana tends to be a pickup because weekends are for driving the boat to the fishing grounds or transporting whatever has been hunted. I thought there would be a plentiful supply of low-mileage, inexpensive cars to choose from, as I would expect in the UK. However, this is where I found my first pitfall.

Let me explain the difference between the UK and U.S. car markets. Within the UK, the government has a set of policies that address European climate change targets. These policies range from heavily taxing polluting cars to setting higher taxes on fuel purchased. In addition to the environmental taxes, there are safety laws to abide, which require having your vehicle assessed in annual inspections. You rarely see pickup trucks or cars older than 10 years in the UK. With gasoline at nearly $10 per gallon, filling a 36-gallon tank in a pickup is an expensive experience at the pump. Factoring an average of 20 mpg around town, you’ll have to plan your journey via the gas station. All this encourages the motorist to think of buying high-economy engines or fuels, which forces the “used” price of gas guzzlers down.

The annual inspection performed on vehicles (three years and older in the UK) also affects the pocketbook and used prices. Every year a government-approved station conducts a series of checks on safety features and engine emissions. And this safety check is linked to a national database, which is linked to the police force. So if your vehicle hasn’t been assessed on time and with a passing score, your insurance is void, and the UK police can remove the car from the road—even crush it into a cube if they’re really in a bad mood. Your car’s emissions are also linked to how much annual tax you must pay; so the less efficient the engine is, the more it costs you to drive.
Coming back to the pickup example, you might have to pay $800 per year for the environmental tax, and if you must also fix all the safety failures, then remedial annual repairs can get costly. Again, this all drives down the value of your used car.

So within the UK, you can readily find cars about 10 years old that cost less than $1,500; however, you may have to pay out more for inefficiency, work to correct any safety concerns, and pay higher tax duties. With America bursting at the seams with cars, I figured I’d be presented with the same “cheap” options. What a mistake that was.

In the UK, the annual inspection takes a least half a day: checking for tire wear, brake efficiency, corrosion, seat-belt integrity, engine emissions, light functions, leaks of any sort, wiper blade condition, windshield cracks, and many more too long to list—all for a $75 fee, even if you fail the inspections. If you do fail, you have a set period of time to correct and have your car reinspected. If your car can’t pass, and you choose to scrap it, you may have to pay the scrap merchant a disposal fee to take care of the environmentally dangerous parts lurking in your car. Where I live now, the annual inspection for vehicles consists of “if you can drive it to the inspection garage, you’ve passed,” and it cost me $10 for the pleasure of a square sticker in my windshield.

With little to encourage the average car owner to keep the car to high standards, or government policies for driving (excuse the pun) environmental improvements in Louisiana, there’s not much incentive to force down the cost for used vehicles. I do observe that brand new cars are much cheaper than their equivalents in the UK; however, the depreciation curve is much steeper in the UK on used cars.

Putting all this into a quality perspective, in the UK the senior leadership (i.e., the government) is trying to create a culture of efficiency by hitting the taxpayer where it hurts. As a result we have more cars on the road that are safer and also environmentally friendly. To illustrate the contrast between UK and Louisiana cars, I’ve included some examples of vehicles I’m fairly certain would never be allowed on UK roads. 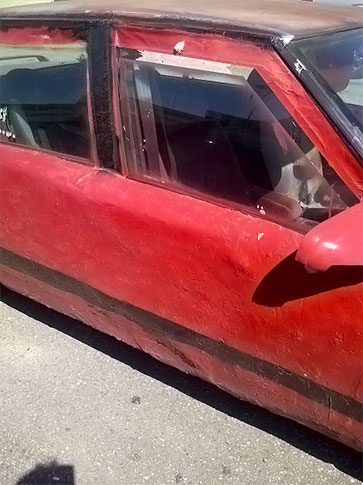 Example 1: The nonopening side of the car. How would you be able to exit in an emergency? I personally appreciate the effort in the black panel stripe. Not so good is the red paint on the replacement window. 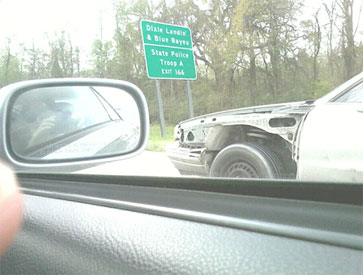 Example 2: The lightweight model. Note the string holding the bumper on. This was taken when we were travelling on the interstate. 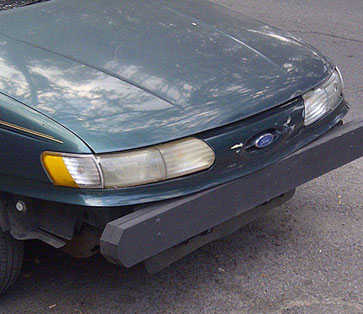 Returning to the Toyota experience, my wife had done some great research at the local dealerships and identified another Japanese manufactured car online. So she went to see it, only to find that the dealer had sold it. However, they had just received a Toyota as a trade-in; she test drove it and liked it. So after work I went and looked at it myself. Given my experience with the UK system, having bought and owned many used cars in the UK, and knowing what to look for in a used car, to my mind I already had an advantage over the dealership.

Before taking the Toyota out for a spin, I was under the hood, on the floor under the car, checking the electrical system, feeling the viscosity of the oil, opening caps, and taking notes in my little notepad. The salesman was very adamant that this was an excellent “example” and kept reminding me that it was a trade-in. He threw out a value he was willing to sell it to me for, but with my list in hand, I fired back about the safety concerns I had (knowing there is a litigious culture in the U.S. can work to your advantage). We played this game for awhile until I got him to agree to fix many of the issues, at his cost, and a whacking great discount besides.

Since owning the Toyota, we have travelled all across Texas and Louisiana in it, and I absolutely enjoy every minute driving it. My wife recently asked me to upgrade the stereo to accept her iPod. Pulling the dash apart, I was exposed to a new element of the Toyota quality model: the hidden insides of the car. I was able to see the level of simplicity and mistake-proofing designed into the car. The dash components are so well made that that there are few screws or bolts. The snap-fit latches when reassembled, and it’s strong and fast. Thanks to the car’s excellent design, even a bumbling idiot like me can ensure quality during the reassembly process.

So do I no longer have a Toyota dilemma now that I own one? Actually, I have a new Toyota dilemma. I live approximately 7 hours away from San Antonio. There is a mega Toyota factory there that builds pickup models. It is my intention to visit the factory and take a tour, and therein lies my dilemma: who to take with me. Do I take the managers who have never been exposed to a world-class production system? Do I take high-potential employees by way of a reward? Do I take the quality professionals to let them learn about the Toyota Production System? Do I do the tourist thing and take my wife for a nice day-trip, like I did to the Tabasco sauce factory? Or do I fill up a bus?

As with my previous Toyota dilemma, I will use the 5 Whys technique to help me out. It always gets me to where I should be. 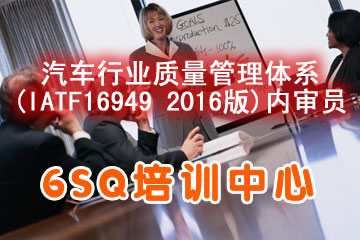